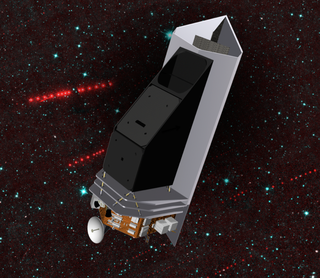 The Near-Earth Object Camera (NEOCam) has been selected for Phase 2 of development, as part of NASA's Discovery program in planetary science. NEOCAM joins four other missions in contention for approval, by next September, of the next one or two Discovery-class satellites to be launched. It would be based on state-of-the-art infrared sensors developed by University of Rochester astronomers in collaboration with Teledyne Corp.

NEOCam's primary goal, in its proposed four-year mission, is to discover 2/3 of of the NEOs 140 m or larger in diameter, which could cause major damage were they to collide with Earth. The most energetic Earth impact in recorded history -- the Tunguska event of 1908 -- is thought to have involved an asteroid about 140 m in diameter. NEOCam's asteroid census would be a large step toward the Congressionally-mandated NASA goal to identify 90% of the NEOs 140 m and larger. In addition to their orbits and sizes, NEOCam will characterize the shapes, composition and rotation of this scientifically-interesting class of small solar-system bodies.

NEOCam itself is a satellite-borne telescope and two-color, wide-field camera, deployed at the first Earth-Sun Lagrange point (L1). Its most important new, enabling technology is a pair of large-format mid-infrared detector arrays, revolutionary in the senses of high detection performance and high operating temperature. In contrast to the previous state of the art of mid-infrared detectors, which required cooling to temperatures near that of liquid helium, the NEOCam detectors operate almost a factor of ten warmer, at temperatures which can be achieved by passive cooling (radiation to outer space). This greatly simplifies the instrument design, minimizes satellite mass and volume, and results in a substantial cost savings. These detectors were developed by the University of Rochester Infrared Astronomy group -- Prof. Judy Pipher, Prof. Bill Forrest, Senior Engineer Craig McMurtry, and graduate students Meghan Dorn and Mario Cabrera -- in collaboration with Teledyne Imaging Sensors, Thousand Oaks, CA.