The department faculty currently participate in a broad range of major experiments.

This branch of physics incorporates elements of astrophysics, particle physics, and cosmology. By observing very high energy cosmic rays, gamma rays, and neutrinos arriving at Earth, we hope to understand where these particles are accelerated and how the accelerators work. The extreme energies (> 1 TeV) and cosmologically large distances to the sources also make these particles important probes of interstellar and intergalactic space. 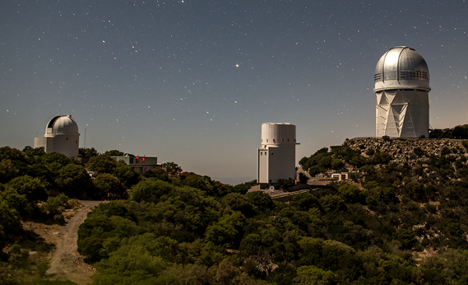 The group was also involved in the search for TeV gamma rays at the High Altitude Water Cherenkov (HAWC) Gamma-ray Observatory in central Mexico (Professor BenZvi).

The LZ experiment is the upgraded successor to the highly successful Large Underground Xenon (LUX) experiment (Professor Wolfs) located at the Sanford Underground Research Facility (SURF) in South Dakota (https://www.sanfordlab.org/). LZ involves a collaboration of 250 scientists, engineers and technicians from 38 institutions, including five U.S. National Labs. LZ expects to achieve a projected sensitivity level up to 100 times better than the final LUX search result for weakly interacting massive particles (WIMPs), the leading dark matter particle candidate. Currently in the construction and installation phase, LZ is expected to begin operations in late 2019. The collaboration will perform a direct search for dark matter using 10 tonnes of liquid xenon within an ultra-pure titanium cryostat that will be surrounded by a new liquid scintillator veto system. The entire experiment will be immersed in a 72,000-gallon tank filled with ultra-pure water. 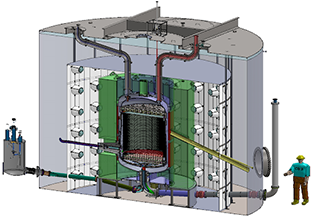 Rochester is also involved with the search for astrophysical neutrinos at the IceCube Neutrino Observatory (pictured below) at the South Pole (Professor BenZvi).  Encompassing a cubic kilometer of ice, IceCube searches for nearly massless subatomic particles called neutrinos. These high-energy astronomical messengers provide information to probe the most violent astrophysical sources: events like exploding stars, gamma-ray bursts, and cataclysmic phenomena involving black holes and neutron stars. Approximately 300 physicists from 52 institutions in 12 countries make up the IceCube Collaboration. The IceCube and LZ groups at Rochester are collaborating in the search for neutrinos from nearby supernovae as part of the SuperNova Early Warning System (SNEWS), a worldwide network of neutrino detectors.

Our current neutrino effort is focused on realizing the full potential of the future DUNE neutrino oscillation experiment.  DUNE will use an intense neutrino beam that will be sent from Fermilab (near Chicago) over 800 miles to a detector sited a mile underground in the Sanford Underground Research Facility in South Dakota.  The experiment seeks to discover matter-antimatter asymmetries in neutrino flavor transitions, which may lead to a deeper understanding of the origin of the matter in our universe.  DUNE also will determine the ordering of the neutrino masses, and test our current understanding that all neutrino oscillation phenomena originate form the known three types of neutrinos.   The experiment will also be sensitive to neutrinos from supernovae and search for proton decay.  In addition to applying our expertise in neutrino interactions to the experiment, we are working to realize the “near” detector for this experiment which measures the beam before oscillations (Profs Manly, Marshall and McFarland). 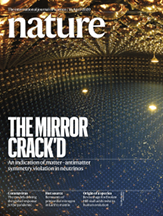 The Rochester neutrino group is also involved in the current T2K (Tokai to Kamiokande) neutrino oscillations experiment at the Japanese Proton Accelerator Research Complex (J-PARC). T2K measures the probability that muon neutrinos oscillate to electron neutrinos as they propagate from Tokai to Kamiokande.  In addition to paving the way for DUNE, T2K’s results provide a tantalizing hint of the matter-antimatter asymmetry described above  (Profs. Manly and McFarland)

Underpinning these efforts is our work to measure and model neutrino quasielastic, inelastic and resonance production on nuclear targets, primarily with data from the MINERvA detector at the NUMI beam at Fermilab (Profs Bodek, Manly, McFarland).  A complementary effort is the investigation of electron quasielastic, inelastic and resonance production on nuclear targets with the JUPITER experiment at Hall C at the Jefferson Laboratory (Profs. Bodek, Manly, and McFarland).  These data, together with our efforts in phenomenological theory, provide a detailed understanding of neutrino-nucleon interactions for neutrino oscillation experiments.

Our Energy Frontier group is engaged in analyzing data that represent the fruition of years of efforts toward construction of the Compact Muon Solenoid (CMS) detector at the Large Hadron Collider including studies of the heavy quarks, W and Z bosons, and searching for new physics

such as supersymmetry. The group is also actively engaged in upgrading the detector for the High Luminosity LHC era that will significantly extend the discovery potential and allow exploration of the Higgs sector to its fullest.

These studies are now ongoing at the CMS experiment at the Large Hadron Collider at CERN, again focusing on studies of the top quark, W and Z bosons, and investigation of the Higgs boson and search for supersymmetric particles (Profs. Bodek, Demina, Garcia-Bellido). The group played a major role in the construction of the CMS hadron calorimeter (Bodek) as well as the construction of the silicon tracker (Demina), and is now working on that upgrade.

The Department has a long and distinguished history of research in the field of particle physics, which continues to the present.